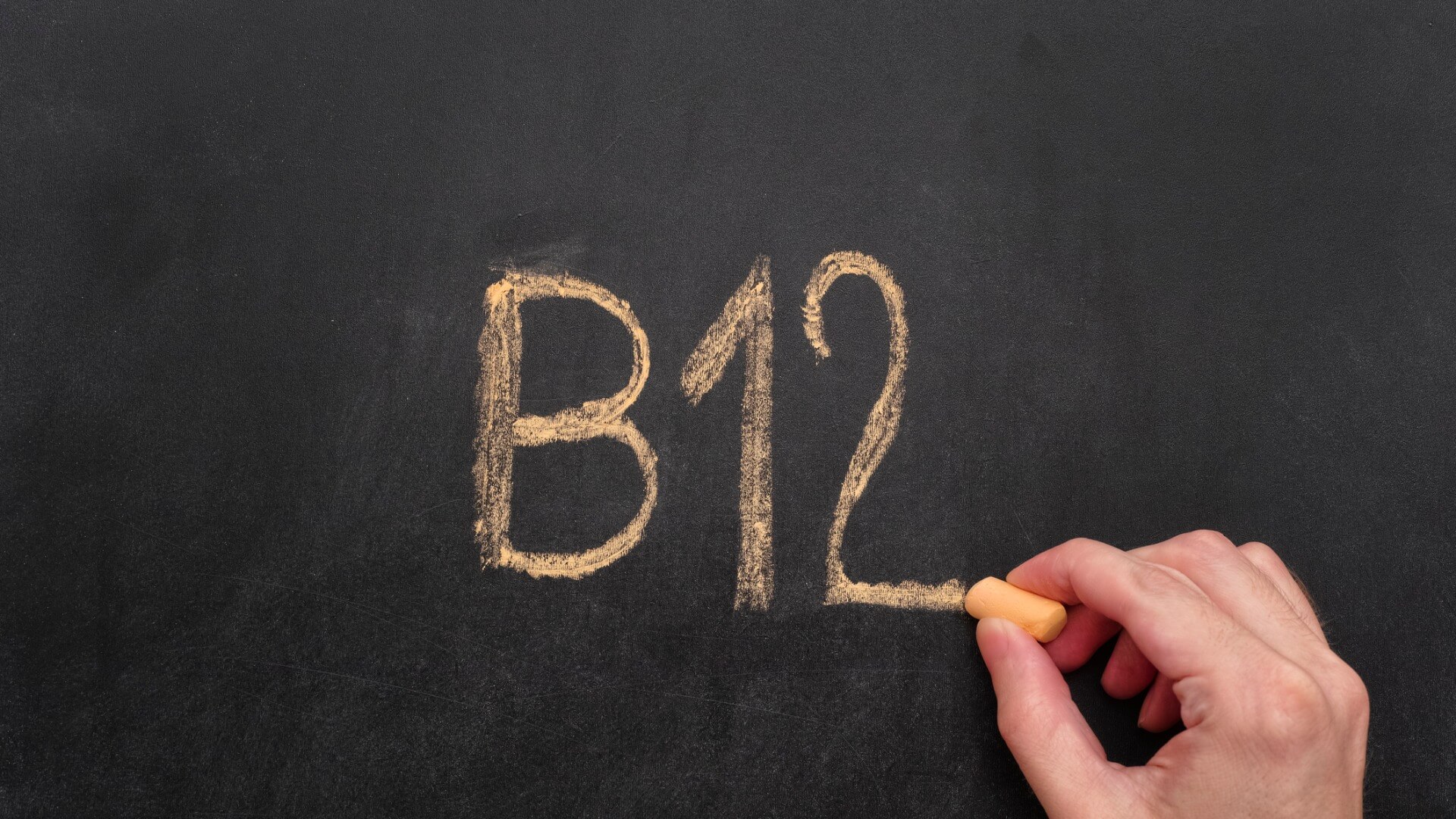 What is vitamin B12?

The term “essential” means that our body cannot produce Vitamin B12 itself. We must therefore obtain it from food and/or supplements. Nowadays, many foods (e.g. breakfast cereals, plant-based milks) are often fortified with vitamin B12.

Vitamin B12 is an important cofactor: a substance required for enzymes to work effectively. The enzymes that use Vitamin B12 as a cofactor are involved in key processes such as the synthesis of DNA, the production of red blood cells, and the generation of energy from fats and proteins.

We therefore need to get enough Vitamin B12 for our bodies to function properly and to maintain a healthy cardiovascular and nervous system. Why is vitamin B12 important?

We’ve encountered SAM before, in the Betaine Synthesis and Metabolism blog. SAM, and therefore Vitamin B12, is extremely important for a particular kind of chemical reaction called methylation. Methylation reactions are required for several processes, including:

Our nerves (or neurons) are surrounded by a protective fatty layer of insulation called the myelin sheath. The myelin sheath acts in a similar fashion to the insulation around an electrical wire – its main role is to enable the efficient transmission of electrical signals through a nerve. Vitamin B12 is required for production and preservation of the myelin sheath, and therefore is important for sending signals throughout our nervous system.

In addition to helping produce myelin, Vitamin B12, via the production of S-adenosylmethionine (SAM), is also involved in the manufacture of neurotransmitters (nerve-communication molecules), including: dopamine, noepinephrine (noradrenaline) and serotonin.

Vitamin B12 also acts as a cofactor for an enzyme called L-methylmalonyl-CoA mutase. This enzyme is responsible for making an important molecule called succinyl-CoA, which is involved in several key chemical reactions.

In particular, succinyl-CoA plays a role in the production of haemoglobin - the pigment in red blood cells that carries oxygen around the body. As a result of this, we need to eat and absorb enough Vitamin B12 in order to make healthy red blood cells.

On this note, people with pathologically low vitamin B12 levels (most commonly caused by conditions that affect B12 absorption) produce underdeveloped red blood cells that are less effective at carrying oxygen around the body. This is termed vitamin B12 deficiency anaemia.

Low levels of vitamin B12 have also been linked to an increased risk of cardiovascular disease, neurodegenerative disease, and certain cancers.

How does the body absorb vitamin B12?

The first stage* of vitamin B12 absorption therefore involves separating the Vitamin B12 molecule from protein. This is carried out by hydrochloric acid and protease enzymes within our stomach.

Our stomach also produces a carrier protein called haptocorrin (HC). This binds to the newly released Vitamin-B12 and protects it from being damaged by the acid environment of the stomach. Once in the small intestine, haptocorrin is degraded and Vitamin B12 is then re-released.

(*It’s worth noting that the Vitamin B12 in supplements and fortified foods is not bound to protein, and so doesn’t need to undergo this first separation stage).

In the second stage of absorption, cells in our stomach lining (called parietal cells) produce a specialized substance known as intrinsic factor (IF). Intrinsic factor binds to Vitamin B12, allowing it to be absorbed into the bloodstream by the small intestine (ileum).

Once in the bloodstream, Vitamin B12 is transported to different tissues in another carrier protein: transcobalamin-2 (TC). Problems with the absorption of Vitamin B12

Similarly, long-term (or ‘chronic’) inflammation of the stomach lining can cause destruction of parietal cells. This is known as atrophic gastritis. In most cases, atrophic gastritis is caused by infection of the digestive system with a type of bacteria known as Helicobacter pylori (H. pylori).

By destroying parietal cells, atrophic gastritis impairs the production of intrinsic factor and therefore reduces the absorption of Vitamin B12.

What is FUT2 and why is it important?

FUT2 is a gene that encodes an enzyme called alpha-1,2-fucosyltransferase.

This enzyme is crucially involved in something called our “secretor status”. In brief terms, your secretor status refers to whether or not you produce the ABO blood type antigens in other bodily fluids, such as saliva, sweat and mucus.

Research suggests that your FUT2 gene and secretor status affects the levels of vitamin B12 in your bloodstream. It may also affect your susceptibility to certain viral and bacterial infections.

We’ll explain this in more detail below.

If you happen to know your blood type, you’ll know that you fall into one of four main types: A, B, AB or O.

These letters refer to the different types of sugars (known as antigens) found on the surface of your red blood cells. Apart from red blood cells, other cells in your body are also capable of producing these ABO blood type antigens. Rather than being attached to the surface of cells, however, these ABO antigens can be secreted directly into various bodily fluids. Importantly, this ability depends on your secretor status.

If you are a non-secretor, however, your cells are incapable of secreting ABO blood type antigens into bodily fluids. Consequently, your saliva, mucus, sweat etc. will not contain any ABO antigens.

As we’ll explain in the next section, whether or not you are a secretor depends on which variants of your FUT2 gene you inherit.

(It’s important to note that your blood type and secretor status are separate things. Your particular blood type (i.e. what antigens your red blood cells produce) doesn’t affect whether or not you’re a secretor (i.e. whether other cells secrete ABO antigens into body fluids).

How does the FUT2 gene affect secretor status?

As mentioned previously, your FUT2 gene codes for an enzyme called alpha-1,2-fucosyltransferase (FUT2 enzyme). This enzyme normally helps with the secretion of ABO blood type antigens into bodily fluids.

A single-letter change (or SNP – Single Nucleotide Polymorphism) in the DNA sequence of the FUT2 gene, however, gives rise to an inactive FUT2 enzyme. This, in turn, prevents the secretion of ABO antigens into bodily fluids.

More specifically, a SNP (given the number rs601338)* causes a change in the DNA code from the letter G to the letter A. This creates two FUT2 gene variants or “alleles” - the ‘G’ allele and the ‘A’ allele. The ‘A’ allele is associated with an inactive FUT2 enzyme.

By contrast, if you inherit one or two copies of the ‘G’ allele (i.e. you have the GA or GG genotypes), your cells will produce active FUT2 enzyme. This means you will secrete ABO antigens in bodily fluids and are classified as a secretor.

Approximately 80% of the population are secretors, with 20% being non-secretors (although this figure varies between different ethnic groups).

As explained in the following sections, your secretor status (which is determined by your FUT2 gene) impacts upon your blood levels of Vitamin B12 and your immune system.

How does FUT2 and secretor status affect blood levels of Vitamin B12?

Research suggests that, compared to secretors (i.e. people with the GA and GG FUT2 genotypes), non-secretors (i.e. those with the AA genotype) have higher levels of Vitamin B12 in their bloodstream.

For example, an analysis of 1,658 healthy Caucasian women participating in the Nurses’ Health Study found that non-secretors had significantly (around 16%) higher blood plasma levels of Vitamin B12.

Non-secretors in the study were found to have an average plasma Vitamin B12 concentration of 497 pg/ml, whereas the corresponding figure for secretors was between 418 and 419 pg/ml.

To put these numbers in context, a healthy blood Vitamin B12 level is considered to be between 200 and 900 pg/ml.

Why does FUT2 activity and secretor status affect Vitamin B12 levels?

It’s not clear why non-secretors have higher blood Vitamin B12 levels compared to secretors.

Some evidence suggests that secretors have poorer absorption of Vitamin B12 from the gut.

On a related note, some research suggests that secretors are more likely to have H.pylori bacteria growing within their gut lining. This may be due to ABO blood type sugars, which “secretors” release into mucus within the digestive system, acting to nourish and/or facilitate the attachment of H.pylori to the gut lining.

In turn, infection of the gut with H.pylori can give rise to inflammation (atrophic gastritis), which destroys the cells that produce intrinsic factor. This results in reduced release of intrinsic factor and therefore poorer absorption of Vitamin B12.

Other studies suggest that the FUT2 gene affects the transport of Vitamin B12 in the stomach using the carrier molecule haptocorrin.

Non-secretors (people with the AA genotype) are shown to have higher levels of haptocorrin (see graph C), which protects Vitamin B12 from the acidic environment of the stomach. This may lead to greater absorption of Vitamin B12 and has been linked to higher blood levels of Vitamin B12 (Graph A).

Am I at risk of low Vitamin B12 levels?

The Recommended Daily Allowance (RDA) for Vitamin B12 (for healthy adults) is 2.4 micrograms per day.

RDA refers to average daily intake that is sufficient to meet the nutrient requirements of virtually all (97%–98%) healthy individuals.

Vitamin B12 deficiency caused by inadequate dietary intake is relatively rare. Nevertheless, people adopting a strict vegan or vegetarian diet may be more at risk, as they may avoid eating Vitamin B12-rich products such as meat, fish, eggs and dairy products. Consequently, people adopting a vegan diet are often advised to take Vitamin B12 supplements.

Most cases of low Vitamin B12 levels in the bloodstream result from poor absorption of Vitamin B12 in the gut. In addition to various medical conditions, elderly people may be more at risk of Vitamin B12 deficiency as they secrete less stomach acid (which is needed to release B12 bound to proteins in food).

While secretor status does affect Vitamin B12 absorption and levels in the blood plasma, being a secretor alone is highly unlikely to cause Vitamin B12 deficiency.

Although secretors have been shown to have lower levels than non-secretors, studies in healthy subjects show that both groups have plasma Vitamin B12 levels well within the normal range.

How do FUT2 gene variants and secretor status affect our immune system?

FUT2 gene variants and secretor status have been shown to affect your immune system function and susceptibility to some infections.

In particular, non-secretors (people with AA genotype) seem to be less susceptible to viral gastroenteritis (sometimes known as “stomach flu”). This is a condition characterised by watery diarrhoea, vomiting and abdominal cramps, and is caused by viruses such as rotavirus and norovirus.

Non-secretors are also less likely to develop stomach ulcers caused by infection by the H.pylori bacteria.

It’s not clear why the FUT2 gene and secretor status affects immune function. It’s possible that, by not secreting ABO blood type antigens into mucus lining the digestive system, non-secretors prevent viruses and bacteria from binding and entering human cells.