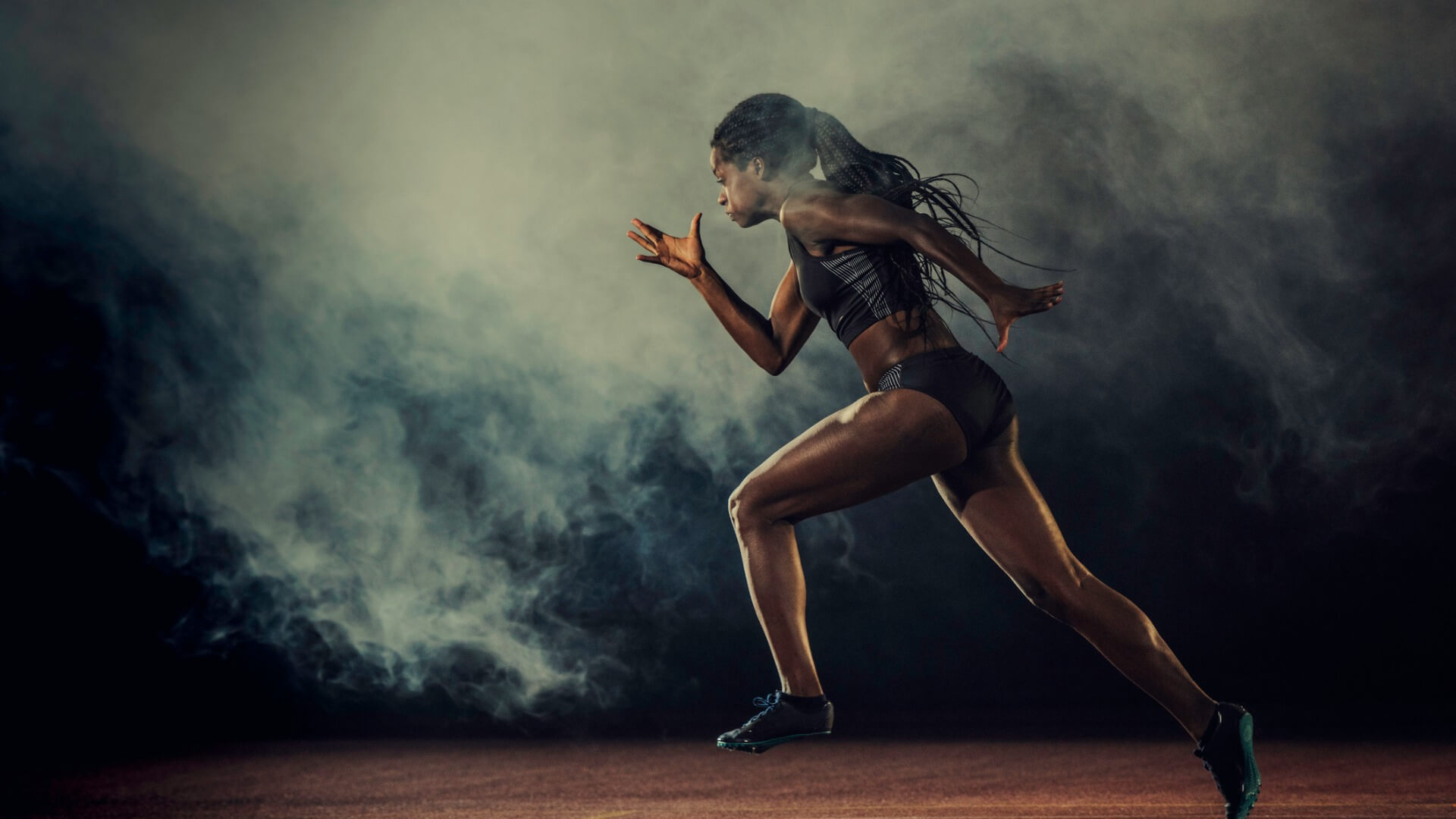 ACTN3 is the famous “gene for speed”.

One variant of the ACTN3 gene, the R allele, results in production of the alpha-actinin-3 protein and is significantly more common in strength, power and sprint athletes – hence the “gene for speed” moniker.

By contrast, people carrying two copies of the X allele / variant do not produce any alpha-actinin 3 protein at all. Approximately 18% of the global population fall into this group, who we term as having alpha-actinin 3 deficiency.

How do variants of the ACTN3 gene alter production of the alpha-actinin-3 protein?

The ACTN3 gene is a great example in biology of how tiny changes in our DNA code can affect the structure, function and quantity of proteins we produce. This, in turn, can have a significant downstream effect on our exercise performance.

In this section, we’ll detail this entire process.

DNA is the code for life. It contains all the instructions to create and maintain cells. You may find it helpful to think of DNA as our body’s cookbook.

If DNA is the cookbook, our genes are the individual recipes. Our entire set of DNA contains about 21,000 genes - stretches of DNA that code for specific proteins. When we say proteins, we mean molecules such as enzymes that carry out vital chemical reactions, transport proteins that move substances into and out of cells, and structural proteins such as collagen or, the subject of this trait, alpha-actinin-3.

Our DNA code and codons

The DNA molecule itself is composed of a sequence of four different subunits or “nucleotides,” to which we ascribe the letters:

The specific order of these letters (or nucleotide bases) determines which proteins our cells make. The beauty of our DNA code is that groups of three letters (nucleotides) correspond to different amino acids – the building blocks of proteins. For example, when machinery in our cells reads the DNA sequence C-G-A (Cytosine – Guanine - Adenine), it will eventually produce the amino acid arginine. When it reads the sequence C-A-T (Cytosine-Adenine-Thymine), it will produce the amino acid histidine. We call these groups of three nucleotides “codons.” Note, that our cells first convert DNA into another intermediate molecule, mRNA, through a process called transcription. mRNA is then made into proteins in a process called translation. Nevertheless, the code is retained throughout this process, so that the letters in our DNA sequence determine what amino acids we make.

By reading codons along a stretch of DNA within a gene, machinery within our cells string together different amino acids to form long protein chains. For example, when our cells read the DNA sequence: C-G-A-C-A-T, they will link together arginine and histidine.

In this respect, the order of letters in our DNA code determines the sequence of amino acids we make, which, in turn, determines the structure and type of proteins we produce.

As well as coding for amino acids, some codons (called stop codons) signify the end of a protein sequence. When our cells read a stop codon, they stop stringing together amino acids, resulting in a completed protein chain. An example of a stop codon is: T-G-A.

At certain points along our DNA sequence, there may single-letter (or single nucleotide) changes. For example, instead of there being a C (cytosine), there may instead be an T (thymine). These single-letter changes in our DNA code are called SNPs (Single Nucleotide Polymorphisms) – pronounced “snips”. By changing the letters in our DNA code, SNPs can alter the sequence of amino acids that our cells link together into proteins. Consequently, SNPs can modify the resultant structure of the proteins that we make. Furthermore, as the function of proteins crucially depends on their structure, SNPs can significantly alter functions such as the ability of enzymes to catalyse a chemical reaction, or the ability of a muscle protein to make high-velocity contractions.

There are thought to be 4-5 million SNPs in the human genome. Given this overwhelmingly large number, we refer to individual SNPs with special codes, called “rs numbers”.This trait focuses on one particular SNP within the ACTN3 gene, rs1815739.

SNPs of the ACTN3 gene

A common SNP of the ACTN3 gene causes a change in the DNA sequence from the letter C (Cytosine) to the letter T (Thymine). This changes one of the codons from C-G-A, which codes for the amino acid arginine, into T-G-A, which is a stop codon.

As a result of this stop codon, cells stop making the alpha-actinin-3 protein prematurely.

Consequently, the X or T allele, which contains the premature stop codon, results in an inability to produce alpha-actinin-3.

By contrast, the R or C allele, which contains the codon for arginine as normal, results in effective production of alpha-actinin-3 protein.

As we inherit two copies of every gene – one from each parent – the SNP of the ACTN3 gene gives rise to three possible gene combinations (called genotypes).

The RR and RX genotypes and power/sprint performance

A recent review of the scientific literature, which collated the results of 20,753 subjects, found that the R allele was significantly associated with elite power athlete status.

Another study of Olympic power athletes found that none of them had the XX genotype. This suggests that the XX genotype may be detrimental to elite power performance.

Most of us, however, are not lucky enough to be elite athletes! As such, the above studies may not be wholly applicable to us. Nevertheless, research on non-athletes and untrained individuals has found that, compared to those with the XX (or TT) genotype, those with the RX (CT) and RR (CC) genotypes have:

A study of older Japanese women (average age = 64 years old) found that the cross-sectional area of mid-thigh muscles was greater in those with the R allele.

Various assessments of muscle strength, such as tests of handgrip strength and knee flexion and extension, suggest that the R allele is associated higher baseline strength.

A study in which older men and women underwent 10 weeks of resistance training found that those with the RR genotype experienced greater strength gains in the quadriceps muscles.

In a study of Greek adolescents, those with the R allele had significantly faster 40-meter sprint times.

Broadly speaking, we have two main classes of muscle fiber. Type I or “slow-twitch” muscle fibers contract more slowly, but are highly resistant to fatigue and can sustain repeated contractions over a long time. They are therefore useful in aerobic and endurance exercise. The proportion of fast and slow twitch muscle fibers, which affects whether we are more likely to be natural “sprinters” or endurance machines, is strongly influenced by our genes, including the ACE and ACTN3 gene. With regards to ACTN3, analysis of thigh muscle biopsies (i.e. tissue samples) has found that people with the RR genotype have a higher percentage of fast-twitch (particularly Type IIx) muscle fibers compared to those with the XX genotype.

Is having the RR genotype, and therefore producing higher levels of alpha-actinin-3 protein, significantly advantageous over the RX genotype?

Research into this question has been inconclusive, with studies reporting mixed findings. For example, a study of soccer players found that those with the RR genotype performed significantly better at 30m sprints, squat jumps and countermovement jumps compared to players with the RX genotype.

Other studies report no significant difference between RR and RX genotypes, both in terms of exercise performance and representation in elite athletes.

The XX genotype and endurance performance

The XX genotype, which results in the inability to produce alpha-actinin-3, is likely to be disadvantageous for elite power and strength performance. As a trade-off, however, this genotype may provide an advantage for endurance exercise such as long-distance running, cycling and rowing. According to some evolutionary theories, this is why the X allele persisted in the gene pool.

Some studies have found the XX genotype to be overrepresented in elite endurance athletes.

For example, a study of elite Israeli endurance athletes found that 34% of had the XX genotype, compared to 18% of non-elite controls.

Despite these findings, it’s important to note that the relationship between the XX genotype and endurance performance is far less pronounced than that between the R allele and spring/strength/power performance.

On this note, studies of Russian endurance athletes and Ironman triathletes have found conflicting or no association between the XX genotype and endurance ability.

Variants of the ACTN3 gene are also thought to affect our muscle recovery after exercise.

During an intense workout, we actually induce damage to our muscles. It is recovery from this exercise-induced damage that leads to the various training adaptations (e.g. muscle growth, increased blood supply to muscles) that improve our fitness.

Generally speaking, the greater degree of muscle damage following exercise, the longer it takes us to recover. On this note, a few studies suggest that the X allele of ACTN3 is associated with higher levels of exercise-induced muscle damage and therefore longer recovery times between workouts.

When our muscle cells sustain damage, they release various molecules or ‘markers’ into the bloodstream. One of these markers is the enzyme creatine kinase, whose levels rise in the blood following muscle damage. Some studies have found that people with the XX genotype have higher levels of creatine kinase following eccentric-contraction based exercise. Eccentric contraction refers to contraction of a muscle while it is lengthening. For example, if you were to resist gravity on the downward motion of a bicep curl, your bicep muscle will be lengthening as it contracts.

So, how do we explain the link between the XX genotype and enhanced susceptibility to muscle damage following eccentric exercise?

Eccentric-contraction based workouts are particularly taxing on our muscles and are likely to induce damage to parts of muscle fibers called Z-discs. Z-discs are the borders between the individual contractile units of muscle fibers (called sarcomeres). They’re made out of various structural proteins, including alpha-actinin-3 and the closely related protein, alpha-actinin-2.

Individuals with the XX genotype, however, do not produce alpha-actinin-3. As such, their Z-discs are mainly composed of alpha-actinin-2 instead. This, however, makes them less stable and more susceptible to damage from eccentric contraction.

If you have the XX genotype and are concerned about being disadvantaged when it comes to power, strength and sprint activities - worry not!

On this note, our proportion of muscle fibers is relatively plastic – it changes according to how we train. In one study, subjects completing 6 weeks of high-intensity sprint training experienced a 7% decreases in slow-twitch (Type I) muscle fibers, but a 12% increase in fast-twitch (Type IIa) fibers.

It’s also important to remember that single gene variants (such as ACTN3) only exert a small influence when analyzed in isolation. In a study of elite 200m sprinters, only 0.92% of the variance in sprint times was explained by the ACTN3 genotype. While this may be the difference between first and second place in an elite level race, the amount of training you do is likely to be much more important for non-elite athletes.

For more information on how best to train, eat and supplement according to your ACTN3 genotype, check out the actions in your ACTN3 and muscle performance trait.