How your muscles work: The energy systems used during exercise 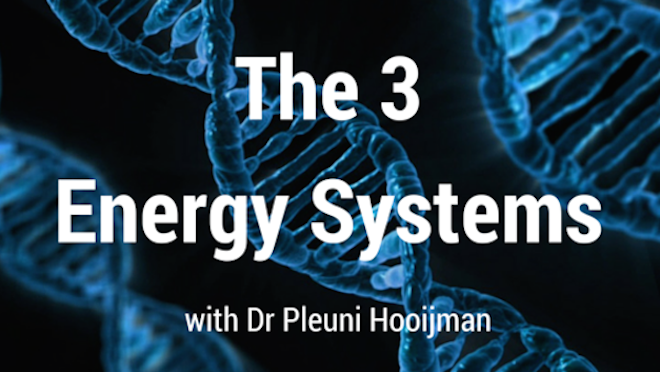 During your workout you’re gasping for air, and afterwards all you can think about is refuelling on carbs and fats. These two seemingly distinct elementary needs are more intertwined than you might expect.  It is all about producing ATP (adenosine triphosphate) - the only compound which provides energy to your cells.

When exercising, your muscles consume huge amounts of energy to keep them contracting and relaxing.  We know that our food provides us with energy, but the sugars and fats from the muesli bar you just ate are not used immediately by your working muscle fibers.  Via long and complex pathways the energy sources from our food and the body’s reserves are processed into substrates (small molecules which enzymes can act on) that help generate the only true ‘energy’ currency for cellular processes: ATP.  It is ATP that energizes our bodily processes, from cell development to explosive muscle contractions.  The largest volume of ATP is produced in the presence of oxygen, which is why our breathing rate increases dramatically when we exercise.

ATP: The only fuel for muscles

ATP is an energy carrying molecule that consists of adenosine and three phosphate groups.  To prevent the energy of ATP from dissipating and being wasted as heat, the energy is only released when it is hydrolyzed (split under the use of water) by enzymes called ATPases.  All of our cells contain these enzymes, and especially our muscle fibers.  During hydrolysis by ATPases, the ATP molecule releases one phosphate group and converts into ADP (adenosine with two phosphate groups) whereby energy is released .  The level of energy released during ATP hydrolysis happens to be perfect for all cellular processes.  Under some circumstances ADP also can be broken further into AMP (adenosine with one phosphate group) but for the majority of the times ADP is recharged like a battery in a process called phosphorylation.  During phosphorylation a phosphate group is attached back to an ADP molecule, resulting in an re-energized ATP that can be used again.

What mechanisms does the muscle use to generate ATP?

Depending on the intensity and duration of muscle activity, muscle fibers use several mechanisms to produce, move, and store ATP so that it is available at the right time, in the right place.   The most important systems during exercise are the phosphagen system, glycolysis, and oxidative phosphorylation, which we will discuss next. The fastest and first: free atp and the phosphagen system

When a muscle starts to contract, the amount of readily available, free moving ATP is depleted extremely rapidly.  The cell quickly starts to run on ATP supplied by the phosphagen system, which doesn’t last too long but provides a good amount of energy for the first few seconds of exercise.  The phosphagen system (the orange curve in Illustration 1) is an energy reservoir that buffers ATP’s energy by the use of the molecule called creatine (Cr), forming phosphocreatine (PCr).  The conversion of CrP is reversible and catalysed by creatine kinase (CK).

The system is in equilibrium during rest (there is as much energy stored as released), but during intense exercise the reaction is pushed to the right, thereby breaking down more phosphocreatine and producing ATP, providing the muscles with energy.

The second fastest: the glycolytic system

Although different and slower than the phosphagen system, glycolysis also plays a role in the first period of exercise.  This system consists of a chain of enzymatic reactions producing ATP from glucose, which is taken from the blood (for example from recently digested food such as that muesli bar mentioned earlier) or is derived from the hydrolysis of glycogen, which is the muscle’s carbohydrate store.  In addition to ATP, one of the other products of glycolysis is pyruvate, which can be processed and used in the final energy system (discussed next) or converted to lactic acid.  Lactic acid is converted to lactate and is a good fuel for certain cell types, but because of its acid characteristics may also play a role in inhibiting performance.

Finally, the slowest but most efficient and long lasting energy system is oxidative phosphorylation.  This provides the muscle fiber with an enormous amount of ATP, under the consumption of oxygen. This process takes place in cell compartments (organelles) called mitochondria.  Muscle fibers are very rich in mitochondria and like you may expect, the concentration is especially high in fatigue resistant (slow twitch) muscle fibers, important for endurance exercise.

Oxidative phosphorylation takes place at the internal membranes of the mitochondria.  This is also the place where oxygen, fatty acids and pyruvate (from glycolysis) come into play.  The mitochondrial membranes are charged by hydrogen ions, forming a so called ‘hydrogen potential’.   Just like a potential in an electrical circuit, the hydrogen potential is a driving force, enabling the production of ATP from ADP and inorganic phosphate (called phosphorylation).

In order to charge the mitochondrial membrane, oxygen is required, therefore this process is called ‘oxidative’ phosphorylation.  In addition to oxygen, molecules that deliver the hydrogen ions are needed.  These molecules are prepared in a chain of coupled chemical reactions, called the Krebs cycle.  The Krebs cycle uses acetyl co enzyme A, which is mainly  derived from pyruvate (the product of glycolysis) and from fatty acids to make these hydrogen-delivering molecules.  The Krebs cycle  produces a few ATP molecules by itself but interestingly also CO2, which subsequently enters the blood and leaves our lungs when we exhale!

Although oxidative phosphorylation may use metabolites derived from carbohydrates, the most important fuel for prolonged activities is fatty acids: that's why it is so important to train fat burning when preparing for a marathon.  It’s also important to note: that when carbohydrates are depleted and fat stores are minimal or not used efficiently, amino acids (the building blocks of proteins) may be used as fuel for oxidative phosphorylation.  When trying to build muscle, this is something you’d like to avoid.